History of the Area

Where legends whisper to those who listen... 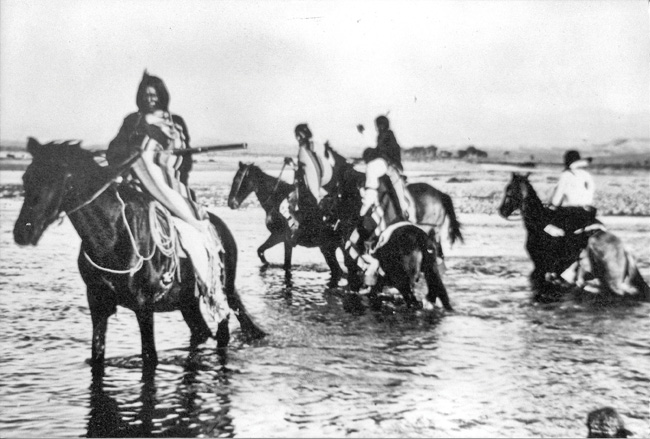 THE UTES: Prior to 1868, the Capote (Kapota) band of Ute Indians lived throughout the region of the southwest that includes the San Luis Valley. A hunting and gathering people, they called themselves “Nuche” or “Nuustiyu,” meaning “the people” or “the mountain people.” They were called “Yutas” by Spanish explorers, then “Utes” as the United States expanded. In the summer, the “Nuutsiys” lived in extended nomadic family groups, and often wintered in New Mexico orNorthern Arizona.  The Utes made a treaty of peace with the United States in 1849. Shortly thereafter, settlers from New Mexico established several settlements in Colorado. In 1868, the Utes were removed to a reservation in western Colorado, until they lost their expansive reservation as a result of the Meeker massacre in 1879.

THE TOWN OF SOUTH FORK: Prior to the arrival of the railroad in 1882, South Fork was primarily known as a stage stop where passengers could stretch before continuing on to northern destinations. The railroad brought cheap and reliable transportation, allowing residents to profit from the area’s abundant resources. Saw mills sprung up to supply local timber to the ever-growing railways and surrounding mining districts. Cattle and sheep were introduced during these early years. In the 1870s, vegetable production, mainly cauliflower, lettuce, potatoes and peas, were the main agricultural resources grown between South Fork and Del Norte. In the latter part of the 20th Century to present day, the tourism industry proved most important to South Fork’s continued economic development. One of Colorado’s newest towns (incorporated in 1992), South Fork remains a regional hub for agriculture, timber, breathtaking scenery, boundless wildlife and family-oriented adventure! 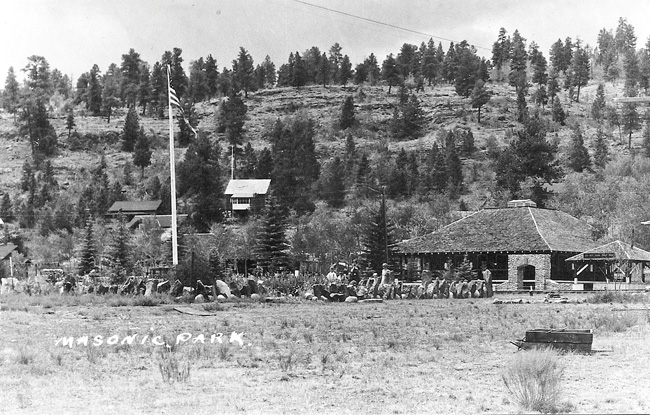 MASONIC PARK:  This was the first Masonic Park in the United States. The land was homesteaded in 1892, and consisted of 160 acres.  In 1914, the San Luis Valley Masonic Association purchased the property to be used as an annual meeting place.  After a bridge was built over the Rio Grande and a water system was installed, the park was platted and lots were available for sale to approximately 800 members.

BARLOW AND SANDERSON STAGE COMPANY:  In 1874, the Barlow and Sanderson Stage Company’s line reached from Missouri to Del Norte but needed to continue west. Alonzo Hubbard was hired to build roads from Del Norte to Antelope Springs, and on to Lake City. Not only was it a passenger route for the company, it provided freight to the quickly developing mining areas.  A few toll roads built by a young Russian, Otto Mears, also became part of this route. From Del Norte going west, the first stage stop was at the Edwin Shaw Ranch, famous for their hay and hospitality.  Located at the present day Rest Area on Highway 160, the little cabin overlooking the Highway is part of the original ranch.  The way station for changing horses was at Bunker Hill, a mile down the road. In 1883, the Denver & Rio Grande Railroad had achieved building rail lines from Del Norte to Wagon Wheel Gap and on to Lake City, making the Stage Route obsolete. Parts of the Barlow / Sanderson road can still be seen along the Silver Thread Scenic Byway. 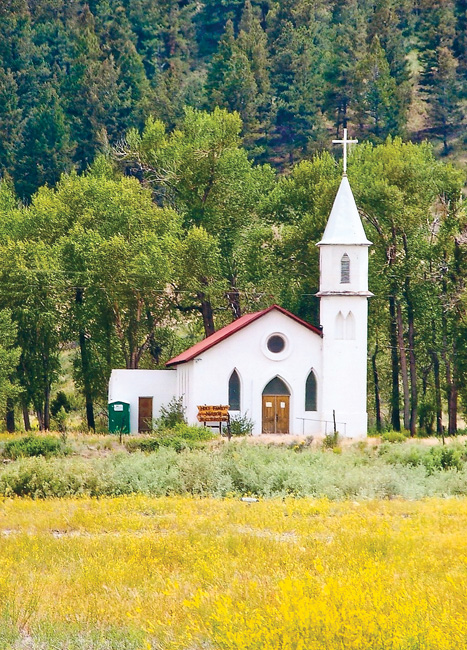 HOLY FAMILY CATHOLIC MISSION: By the 1870’s farmers and ranchers were well established in South Fork, having filed claims for their land under the 1862 Homestead Act. One of these pioneers, Jose Campos, would have descendants who were still farming his land in the 1930’s. For many years, the Campos family invited the mission priest to celebrate Mass services in their home amidst the wheat fields, until they donated the property for a church to be built. The Church was built in the early 1940’s where Mass services still continue today. 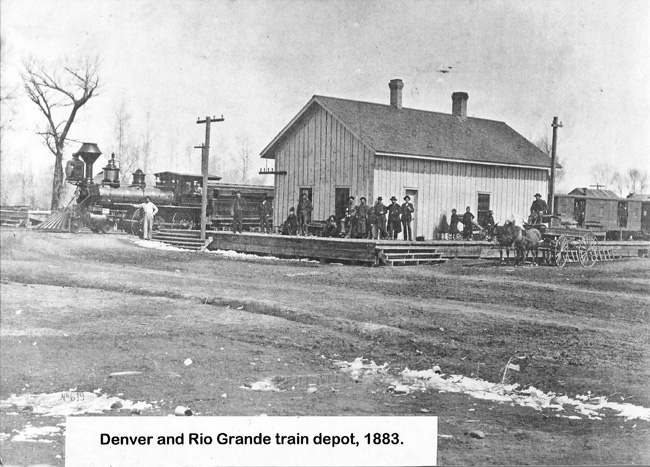 DENVER & RIO GRANDE RAILROAD
General Palmer: General William Jackson Palmer was a visionary who possessed unbounded enthusiasm for building railroads across the west. His tremendous energy brought the Denver & Rio Grande narrow-gauge line from Denver to Pueblo, and hundreds of miles of track across the San Luis Valley. These narrow gauge tracks (thinner by 1-2 feet) allowed rail cars to navigate the steep grades and sharp curves throughout the San Juans. Palmer’s D&RG routes ensured shipment of San Juan Territory resources throughout the western United States.  Palmer became one of the richest railroad barons in America. 1883, Palmer’s rails stretched to Wagon Wheel Gap, home to his newly opened Hotel & Hot Springs Resort, which today is the 4UR Guest Ranch. Due to a crippling horse accident in August of 1907, Palmer himself did not get to visit the resort much. His vacation home still stands, and serves as the Ranch’s recreation hall. D&RG Water Tower: In 1881, South Fork’s Denver & Rio Grande Railroad water tower signaled the arrival of the railroad to South Fork, and an end to the famous Barlow and Sanderson Stage Line. A wellspring from nearby Harper Mountain, located east of the present day structure, fed plenty of water to thirsty steam engines. The spring replenished the large tower, and a tin water spout was lowered to fill steam engines before the journey west to Wagon Wheel Gap or the Creede Mining District. The D&RG Water Tower was refurbished in 2002 with a Colorado Historical Society preservation grant. 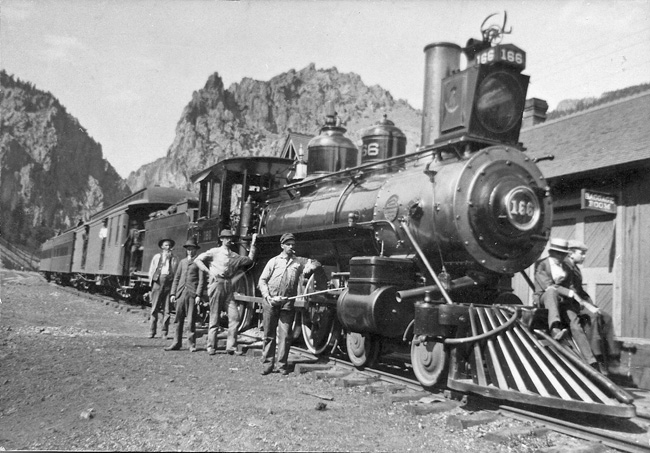 D&RG Rail Line: By 1883, the Denver & Rio Grande Rail Line reached Wagon Wheel Gap, bringing tourists to a mineral hot springs resort owned by the Railroad’s founder. In 1891, it was extended to the mining towns north of South Fork to transport precious minerals and metals out of Willow Creek Canyon. Stringtown, Jimtown and Amethyst were thriving mining camps. Jimtown was eventually renamed Creede after Nicholas C. Creede struck silver and opened the Holy Moses mine. The D&RG Railroad shipped millions of dollars in high quality ore and minerals from these mines. The town of Creede was officially incorporated on June 13, 1892. It was the second town (Telluride, Colorado, being the first) to have electric lights along streets and in homes. This new phenomenon caused Cy Warman to pen this verse in his infamous poem about Creede: “Its day all day in the day-time And there is no night in Creede.” 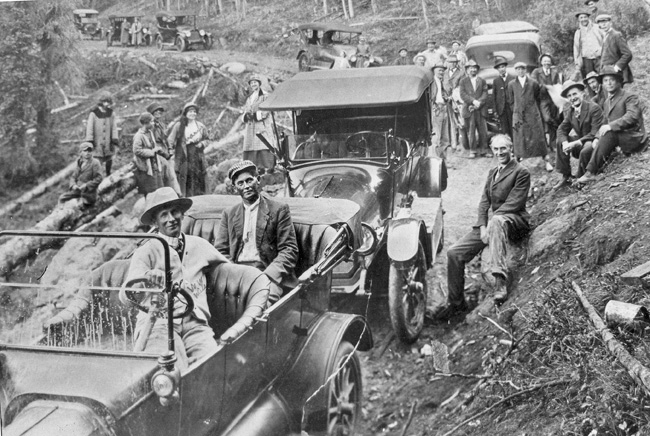 WOLF CREEK PASS:  In 1916 the automobile boom developed a need for a direct route across southern Colorado. The chosen route, known as the Spanish Trail/Grand Canyon Highway, followed along Wolf Creek. The route was funded by the Del Norte Commercial Club, the towns of Del Norte and Pagosa Springs, Rio Grande and Archuleta Counties, the State of Colorado, the US Forest Service and the US Government.  The purpose was to benefit tourism in one of the most picturesque areas of Colorado.  Monte Vista businessmen also worked with a federal grant to help improve the roads from Walsenburg to Durango. In August of 1916, the South Fork and Wolf Creek Pass was officially opened with a state-wide celebration.

WOLF CREEK SKI AREA: By 1930, a movement in the State of Colorado was made to promote skiing.  In 1935, Wolf Creek Ski Area had begun. It originated from a San Luis Valley group of men and women who loved to ski.  Invitations were sent to various Chambers of Commerce to discuss possible locations.  An area near Creede was considered; however, skiers from Monte Vista found a spot on Wolf Creek Pass that offered ski slopes for all levels of skiers.  The original area was on the north side of Highway 160. In 1955, the ski area was relocated across the highway to the present location, adding the installation of a rope tow. Shortly thereafter, the Wolf Creek Ski Development Corporation was formed. In 1960, the Corporation sold the area to a Dallas firm who ran it for two years, after which it came back under the control of the Wolf Creek Ski Development Corporation.

Museums & Historic Sites in the Area