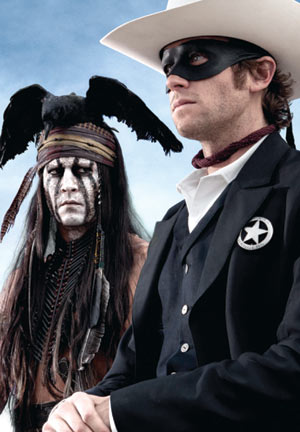 In the spring of 2012, Disney’s latest block buster, The Lone Ranger, swept into town. More than 400 crew members and set construction builders poured into the area, taking up every available room along the Silver Thread Byway. Not since the silver boom of the 1890s have we been turned upside down like this! A palatable excitement filled the air. Everyone hoped to catch a glimpse of Johnny Depp or Armie Hammer. Movie groupies vied for a sighting of Verbinski or Bruckheimer, who are best known for producing/directing the Pirates of the Caribbean series.

Don H. Shank is the founder of the Denver & Rio Grande Historical Railway Foundation, and more recently, Disney’s go-to guy for many set materials required for The Lone Ranger filming. 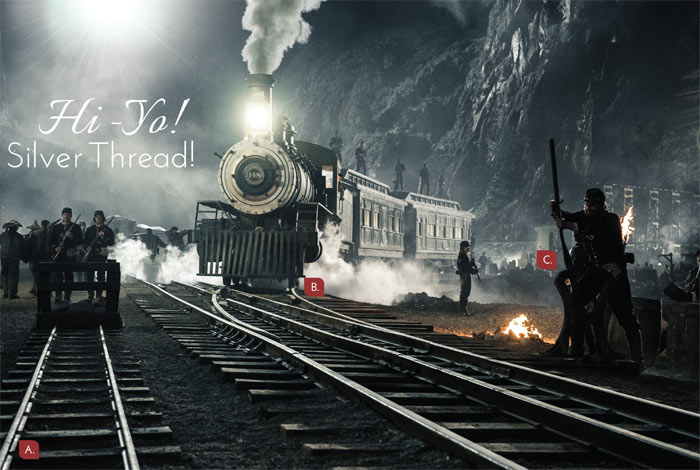 Scenes were shot on the rail line near South Fork and in the canyon above Creede.  In fact, track was re-laid in locations throughout Willow Creek Canyon originally used by the Denver & Rio Grande Railroad in 1891. (A) Shank also became a consultant to Disney’s crews when authentic reproduction locomotives built by the American Locomotive Company kept derailing on these tracks. Shank told them the reproductions were too long and rigid. Restricted lateral movement of the locomotive prevented it from making the sharp angled, seventeen degree turn. The crew tried widening the track but the locomotive continued to derail. Each day lost in a production can cost thousands of dollars and puts the rest of the filming schedule behind. John Fraizer, special effects coordinator of FX Special Effects Studios, Burbank, California, was called in to find a solution. He flew into Alamosa and went straight to Shank’s Monte Vista rail yard where he spotted a 1920 locomotive he liked. He asked Shank if his crew could modify it for production. Instead of modifying a historical piece, Shank showed them how the locomotive was built and what modifications they could do to make their reproduction negotiate the sharp curve above Creede. Mr. Fraizer implemented Shank’s ideas and the locomotive never derailed again, allowing film production to remain on schedule. (B)

Looking for an authentic switch, staff from Silver Bullet Productions revisited Shank’s rail yard. An 1871 HAPP style switch stand was perfect for The Lone Ranger set. Only one catch: producers wanted the switch stand on-set immediately, and the tiny-boned woman and young man sent to fetch it were not able to lift the two hundred pound switch onto their truck! Shank was only three weeks recovering from major back surgery, but despite the warnings from his doctors to avoid heavy lifting, Shank couldn’t let the young man try to lift the equipment alone. “My back hurt for three weeks afterwards, but was worth it to see the actual switch stand in a scene.” (C)

The Lone Ranger, starring Johnny Depp and Armie Hammer, filmed hours of train shots on Shank’s line between mile markers 305 to 311 near South Fork. Edge Performance, a film company that subcontracts for Silver Bullet Productions, can shoot any angle to create special effects. They retrofitted several vehicles with huge rooftop-mounted booms specially made in Russia. Their technologically advanced equipment literally makes a complete 360 degree circle in four seconds! Inside the vehicles, computer operators  could see everything shot during filming on live-stream monitors - every angle, every direction - and could rework a scene from the script in seconds.

Production shot for twelve hours a day. They shot identical scenes next to the highway where logistics made it easier. With the magic of special effects and GPS positioning, Edge Performance would merge scenes to look like the actors were actually on a fast moving train along the banks of the Rio Grande. (D) The scene of a young boy throwing the silver bullet to The Lone Ranger (Armie Hammer) was shot in this manner.